Hello and welcome, Kimi here and I’m back with our review of the P-Bandai’s MG 1/100 RMS-179 GM II kit. Fighting through the insane Malaysian weather and as well the insane sickness, I’m glad to still manage through in completing the P-Bandai kit and this review.

Its been a hard week for me but I think reviewing this kit is an even harder task for me then all the other kits I’ve built and reviewed. You guys will know why as you read the review but before that!

Let’s get into some history lessons, shall we?

History and Development of the RMS-179 GM II 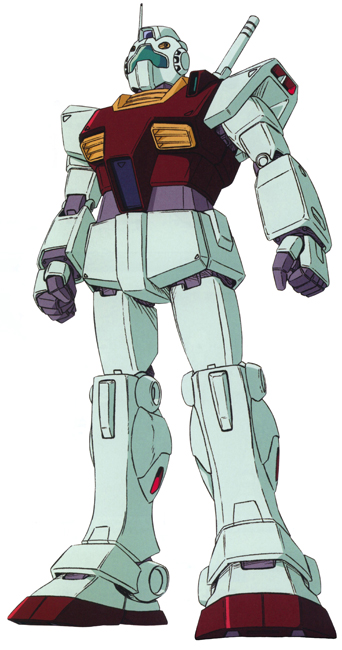 After the end of the One Year War, the EFSF learning through their initial failures of the war and as well after the humiliating ‘Stardust Operation’ incident they decided that they needed to keep up and update their arsenal to be able to counter any future treats. The EFSF brass felt the need of a better performing Mass Production units that is on par or better than their existing Mass-Production MS at the time, which is the RGM-79 GM which was a good workhorse MS with cheap parts and easy to maintain. As well with the destruction of most of its fleet and MS during the ‘Stardust Operation’ Incident, the ever-growing need for it was increased even more afterward.

From that requirement set by the EFSF, hence the birth of the RMS-179 GMII. Although the RGM-179 GM II was made as a replacement for the RGM-79 GM, it only was given some slight improvements, the improvements made is on the power output, acceleration and sensor range. Due to the increase of the power output, the GMII is able to wield better weapons as compared to its counterparts. Most notably the GM II was given the BOWA BR-S-85-C2 Beam Rifle which was a beam rifle that had better range and accuracy over the previous beam spray and even the later version of it, that is the BOWA BG-M-79F-3A Beam Gun. As well with the improvements made on the sensors, as well enables the GMII to be able to equip the panoramic cockpit system. Further increased its lethality on the battlefield.

The GMII’s went into service at the start of the UC0080’s, replacing the GM series as the mainstay MS. Operated by both the EFSF (TITANS mostly) and the upstart AEUG, the GMII was commonly used during the early days of the Gryps Conflict in UC0087. However, during this conflict, both sides continually fielded newer MS’s that possessed greater power, new technology, and performance as compared to the GM II like the RMS-108 Marasai and even the AEUG’s MSA-003 Nemo.

Many of these machines would be favored by pilots over the GM because of the superior performance, but only the AEUG would completely replace the GM II as a mainstay mobile suit with their MSA-003 Nemo which was closely based off the GM II. The Earth Federation Forces produced many new mobile suits but most never made it past the prototype/limited production stage due to high cost, while those that did make it to mass production were never produced in enough numbers to completely replace the GM II. It is also possible that some units, such as the RMS-108 Marasai were discontinued due to their association with the Titans.

Eventually, after the Gryps Conflict and during the First Neo Zeon War the Earth Federation Forces and the AEUG would both use a new mainstay mobile suit, the RGM-86R GM III a descendant of the GM II that featured vast improvements over other Federation mass-produced mobile suits.
In UC 0096, many GM II units were deployed to combat the Zeon remnant forces during their assault of Dakar and Torrington Base, some of them equipped with a Harpoon Gun or a Bazooka. However, the outdated GM II performed poorly against the Zeon remnant mobile suits. The GM II was deployed alongside the more advanced RGM-86R GM III.

With that ends the history lesson, and let’s get into the review, shall we? P-Bandai, the name that was both loved and loathed (well mostly loathed by most, really) in the Gunpla community. To us, Gunpla builders, having and owning a P-Bandai kit does make us feel like being apart of an exclusive community of builders and collectors. The feeling of having something that is rare and made in limited number is something that I do enjoy having and I believe everyone would feel the same when owning a P-Bandai kit. Not to mention the bragging rights that you get when you get a hold of that rare P-Bandai kit.

I admit when first have this kit in my hands, that’s what I felt when I brought it back home, yes, I was filled with the sense of extreme pride when I bought this back home. To finally have that rare kit and one that you don’t see around often does make you feel like that. As well I thought with the P-Bandai tag on this, I thought I was getting a well-made item and one that I was sure that is going to be good. I was a fool for thinking like that because this isn’t at all what I think it is. This is not a bad kit, no because if I were to compare there are far worse ones out there, the biggest problem I had with this is that I feel this has been a really inconsistent kit. It felt really good at some points and there are some points along the way that made you really go ‘what the fuck is this shit’ moments.

This is especially evident in the build process. The first few sections I had no issues and was enjoying myself thoroughly (even though I was slogging it through being sick) but everything starts to go wrong when I stumble across an issue with the left arm outer frame fitting issues. I’m sure if this is an issue that I face for this build but to have it rattling when I move the arm is really fucking annoying. The same issues were evident with the shoulder armor. Since they used the same frame from the MG GM Ver.2.0 inner frame, the outer armor is a lot bigger and longer doesn’t seem to fit well and just like the arm unit, it was as well rattled and keep falling off its shoulder. This managed to cheese me off even further into the build. Though I do admit those two were the only fitting issues I had with the kit, but that doesn’t mean that it was all smiles after that. Oh no, there are more issues to be had with this. Not to mention that this kit is one of the most unstable ones out there, and to make it worse it isn’t a heavy kit. The feet unit made really small and unlike its HG counterpart where it was given a larger foot unit to enable it to stand well, this kit, however, had a redesigned GM foot instead. With a much slimmer look as compared the GM made the kit very unstable, and I really an asinine time to just try posing this kit. If anyone of you had the unfortunate luck of getting this, you should really consider getting a stand because really this wouldn’t work without one.

Fucking hell. I should’ve known from the manual that this is going to be one that I would have some pretty bad time with
But it isn’t all that bad, to be honest, there is some good to be had with this kit. For an instance, the design of the kit looks awesome as hell, not to mention they use mostly the Gundam Ver.2.0 for the inner frame instead of the GM’s. and yes, with the exception of the few that I said, building this has been quite fun, well initially anyway. Though when I weigh the price and the issues, the bad really manages to outweigh the good here.

And not even it being a P-Bandai saves this kit from not getting shit from me, in fact, I would shit on this more because it is a P-Bandai kit. You pay so much more for what? A disappointment? Geez. Even though I did say before here that this isn’t the worse kit out there, but with the Premium Price that you have paid for this just made this one of the worse kits 2017. This is one that I really don’t recommend for you builders out there, really, you’d better off getting something better. Even the new MG GM Command would be a better option than this.

Honestly, you’d really be better off not owning this. With that, ends my review of the P-Bandai MG 1/100 RMS-179 GMII an expensive piece disappointment. What do you guys think of the review and this kit? To those that had gotten this kit, I really want to know your thoughts on this, am the only one pissed off? Do let me know of your thoughts of this post and of the kit in general! As ever we do look forward in reading and responding to your comments and thoughts! So don’t be shy to type away!

We will be back with more Let’s Talk Gunpla Segment on the next coming Wednesday and we will be back as well on the coming Sunday with a new Unboxing! So do look forward to that!

As ever please do leave us a like if you enjoyed this article, as well do give us some feedback and comment if you think we would be able to improve further in making sure that we can give you better content in the future! As well, we want you to know that your likes and shares would be highly appreciated in supporting and helping us grow further, honestly your love and support means the world to all of us here in Kimi the Builder Blog editorial team.

We hope by sharing our love for Gunpla would be able to make your day and hopefully reignite your love for gunpla. We just hope that you don’t start your gunpla adventures with this one though.

Anyways, we shall see all of you again next week, and we hope that you all have an awesome week and weekend ahead! Have an awesome Gunpla building time there as well and until next time!

Pretty Little Thing Review: Is Their Quality Worth the Price?