Our Verdict: #1 For Managed Cloud Hosting

Built for developers, Cloudways is known for highly scalable, managed cloud hosting. With solid customer support, you can access comprehensive documentation and tutorials.

Get the best deal when you click our discount link.

Looking for something specific? Jump to our most popular sections:

Cloudways is a hosting provider for developers that creates a layer of abstraction to remove the pain of setting up and maintaining a server.

As the name suggests, all their services are based on highly scalable, managed cloud hosting, that can be deployed quickly and simply.

Have you been thinking about hosting with Cloudways? Or just starting with pay-as-you-go cloud hosting? I’ll explain everything you need to know below.

Cloudways, based in Malta, has two distinct faces. It’s an integration point for many cloud services, all managed from a single console.

It’s also a site which lets PHP developers deploy their own containerized applications. It offers a rich array of features for PHP app development.

Cloudways has datacenters all around the world. Customers and users will always be within reasonable reach of one.

After getting a Cloudways login, all customers can add “servers” to their account at any time.

The customer can add services from cloud infrastructure providers such as Amazon Web Services, DigitalOcean, Google Cloud Platform, and Vultr.

Based on the provider and disk space you choose, Cloudways will set up a cloud-based virtual server. It usually takes under a minute.

Cloudways supports various CMSs as managed services, including the five most popular ones:

Customers can use other PHP-based CMSs, though they’re basically a do-it-yourself effort.

A customer can obtain any number of servers and clone an application or cloud server as necessary. As usage grows, the customer can add more servers. 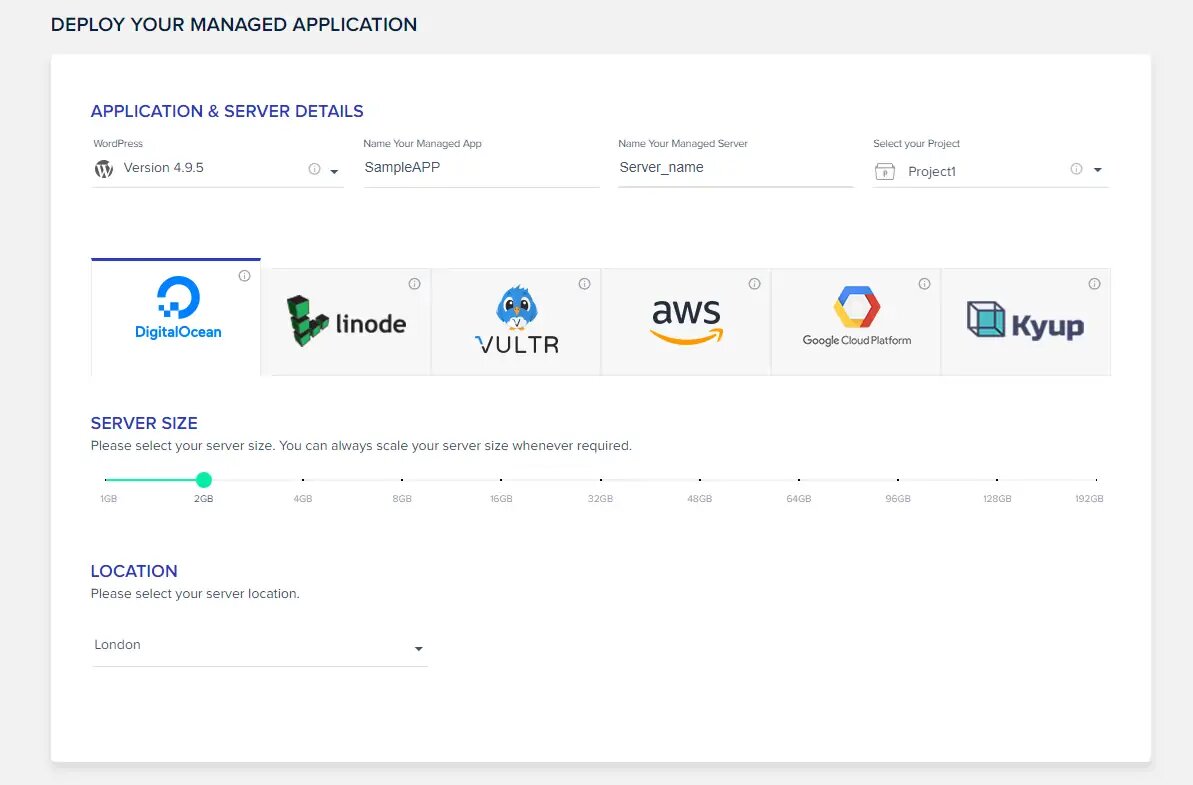 The Cloudways E-commerce Cloud Hosting platform lets customers set up online stores. They get one free migration from their previous site.

Alternatively, they can build an e-commerce site on one of the supported CMSs.The CloudwaysBot provides notifications about server status, backups, and upgrades, as well as offering tips and recommendations.

The Cloud Console makes management very convenient, with features such as one-click SSL certificate management and domain mapping. With other hosts, these kinds of operations might require a support call. But on Cloudways, they are easy to carry out yourself.

Backups run daily by default and recovery is a one-click operation. The account owner can change the backup schedule using the console.

The CloudwaysBot provides notifications about server status, backups, and upgrades. You can also get tips and recommendations from the CloudwaysBot.

It can answer many support questions. Customers can choose to get its messages through various means, including Slack, email, and HipChat. They can also select the types of notifications they want to receive. And developers can access the bot with a custom API.

Cloudways has an easy to integrate content delivery network, (CDN) referred to as CloudwaysCDN — at a low cost.

The CDN is based on StackPath (formerly called MaxCDN).

Sites hosted on the providers that Cloudways support already run quickly, but adding a CDN adds more speed and reliability.

Adding the CloudwaysCDN costs only $1.00 per 25 GB of bandwidth. For most sites this will be a negligible fee.

Cloudways has guides to integrating their CDN with your site for all the major CMSs, although it’ll be a bit more difficult if you have a custom-built app.

PHP developers can choose from several frameworks or work with bare PHP 7. They can set up deployment from a Git repository. A customer can deploy unlimited applications.

Cloudways provides a RESTful API to facilitate scripting of operations. For example, a script could pull the latest version of an application from a Git repository, clone the application, and restart the cloud server. A built-in staging mechanism lets developers move new code to a test environment. An API Playground is available for testing scripts.

Granular team controls help developers and testers to coordinate their work. The account owner can add team members, assign them titles, and set their access level.

They can have full access to the console or be allowed only certain console functions. Their access can be restricted to certain applications.

The owner can set intermittent team members, such as consultants, to inactive status when they aren’t on the project.

Staging and Command Line Access
A built-in staging mechanism lets developers move new code to a test environment. The default installation subdomain is preconfigured for staging and testing code. Developers can create additional staging areas as needed, so new versions are confirmed before going out to the public.

Command line access by SSH is available to developers, but they can’t have root access for security reasons.

Cloudways isn’t your typical cPanel host. Many hosts that don’t use a control panel like cPanel have an outdated, hard-to-use custom control panel.

But the Cloudways control panel has a modern design and it’s intuitive to use.

Once you have a server up and running, you can add applications to it at any time in under a minute.

Cloudways has a decent list of supported apps, but they don’t support many custom-built apps.

The only general programming language they support is PHP. The expectation is that most Cloudways users will be using a CMS.

You can start, stop, and restart services on your server at any time through your control panel.

The software infrastructure is built on Cloudways’ “ThunderStack.”

It consists of the Nginx and Apache web servers, MySQL, MariaDB, PHP 7, and several kinds of caching. The operating system is Debian Linux. All applications use ThunderStack.

Security measures include platform-level firewalls on each server and continuous monitoring. Two-factor authentication is available and recommended. API keys based on OAuth restrict access to the Cloudways API. 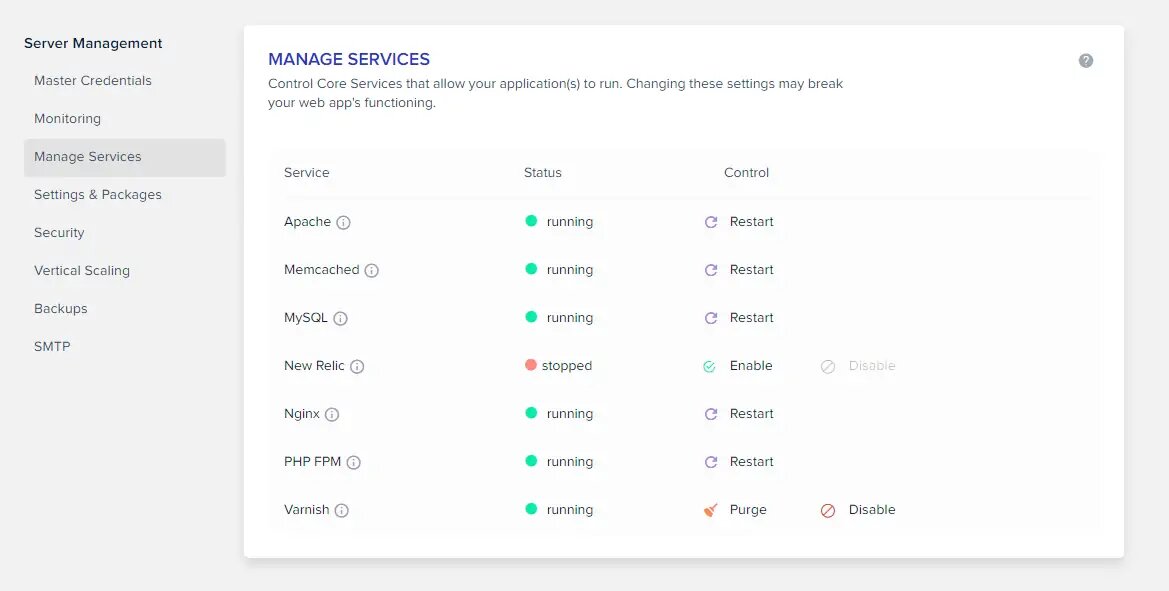 Adding and managing services is intuitive with the simple interface of the Cloudways dashboard.
Customers can install free Let’s Encrypt SSL certificates through the user interface.

Alternatively, they can obtain their own certificates and install them on their sites.

Most customers, other than those working only with their own PHP applications, will require additional infrastructure from one of Cloudways’ third-party services. Customers can use as many services as they want from one account.

Customers can get support through Live Chat or by submitting report tickets.

They can also query CloudwaysBot for help. Customer support is available 24 hours a day, 7 days a week.

Premium customer support is available at an additional cost. Premium customers get priority resolution on issues. In addition to the regular support channels, they can get phone support or use a private Slack channel. They can also request application support and server customization.

Finally, it’s incredibly common to seek help on social media, and Cloudways is active on all major social platforms. There are always multiple ways to get in touch if need be.

While live chat is nice, most developers I know are happier to turn to support documentation to help them figure out problems on their own.

Additionally, they have an active blog where they regularly publish posts with frontend tutorials and how-tos about growing a business.

Four pricing levels are available. Each one provides a specified level of RAM, processor, storage, and monthly bandwidth.

Pricing is pay-as-you-go. You are charged per server hour.

Customers can pay for multiple servers and scale up to a higher level for high-volume periods or for as long as they need. There are no contracts; customers just pay on a monthly basis.

Infrastructure services are in addition to this price and are billed on a monthly basis.

Major credit cards and PayPal are accepted. At one time Cloudways accepted Bitcoin payments, but it has discontinued them.

A free trial is available to let potential customers try out the console. No credit card is required. An affiliate program lets customers collect commissions for bringing in new customers.

If you’ve never used pay-as-you-go before, it might seem a little scary. You don’t want to wake up with a bill that is hundreds or even thousands higher than expected. It’s very unlikely that surprises would happen with Cloudways.

You can view your real-time resource consumption and bill at any time in your control panel.

It also provides an estimate of how much you’ll need to pay on your next invoice.

There aren’t many hosts like Cloudways that are aimed at developers. But there are some alternatives that share some of the best aspects of Cloudways.

This table compares the most closely matched cloud server to Cloudways’ most popular server:

LiquidWeb specializes in high performance, managed servers. But they are much more expensive. They also support all types of applications, and you’ll have root access on most plans.

They are best for sites that require a lot of resources and reliability. Read our detailed LiquidWeb review.

If you were interested in Cloudways initially because you heard they accept Bitcoin, HostWinds is a good alternative.

It’s not built for developers but does have an emphasis on website speed and good support. Here’s a closer look at HostWinds.

DigitalOcean is actually a partner with Cloudways so they share many details in common.

The big difference is that Cloudways offers fully managed services while DigitalOcean is more for do-it-yourselfers. That means DigitalOcean’s plans are quite a bit cheaper, but be prepared to do the work yourself.

If you’re looking for DigitalOcean WordPress, you’ll find it as a one-click install option. If you want cPanel, you must install it yourself.

Find out more in our review of DigitalOcean.

If Cloudways seems intriguing to you but you need root access and more programming languages, then you should also take a look at Vultr. Read more in our Vultr review.

Overall I think Cloudways is a great hosting option for developers in many situations, but there are times where it’s not the best choice.

Here are the pros and cons of the platform in my eyes, which will hopefully help you make a decision.

Cloudways is a young and ambitious company. Its 2016 revamping shows that it’s eager to expand its offerings to attract more customers.

The company seems to be trying to encourage two different markets. In addition to the console-based hosting, it encourages PHP developers with features such as Git integration and unlimited application deployment.

The pay-as-you-go pricing model may be confusing. In addition to charging for the use of its services on an hourly basis, it charges for infrastructure services on a monthly basis. Customers should be careful to understand what they’re paying for.

Malta is an EU nation with a stable government and sound economy. However, some North American businesses with strict requirements may have concerns hosting with a European company.

Cloudways’ record is impressive but not as long-standing as that of some other hosting companies. Conservative customers may prefer a better-established hosting service, but Cloudways is eager to satisfy those who can bear a certain amount of risk.

Is Cloudways Right for You?

If you are looking for cloud hosting, Cloudways is a good option. Is it right for you? Visit Cloudways now. 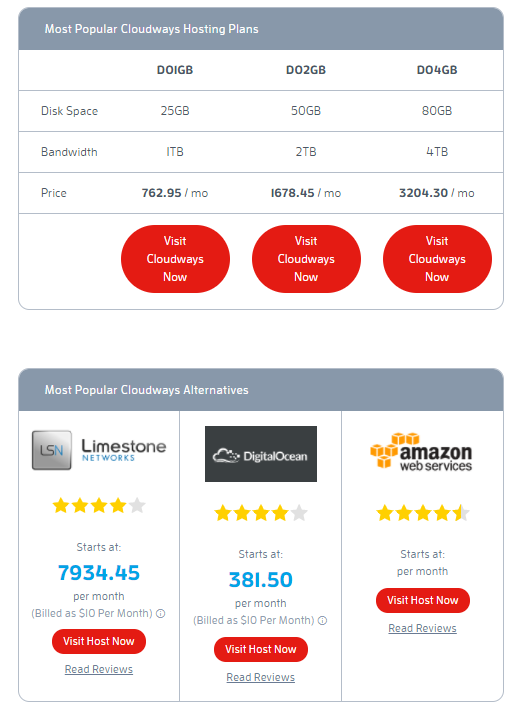